The who, what, where, how, and why of the Facing Project

The Facing Project connects people through stories to strengthen communities. We provide tools, a platform, and inspiration so communities can share the stories of citizens through the talent of local writers, artists, and actors. 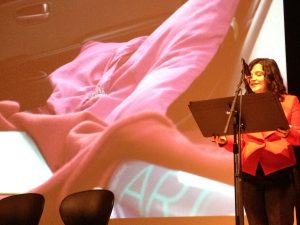 Our model guides communities as they enlist a team of writers to be paired one-on-one with citizens who are facing life circumstances that deserve to be shared to better educate the broader community. The pairs meet, get to know each other and share stories of triumph and tragedy, of loneliness and community, of hate and happiness, of deep depression and lofty goals.

The writers will use their talents to take on the voice and persona of their subjects and write as if they were them—in the first person—bringing to life a voice that has been silenced, while keeping the anonymity of the subjects.

All projects culminate with a book to be shared throughout the community, and acted out by local actors through community theatre and monologues—bringing a face to the voice.

Through these awareness outlets, communities can begin to sit down together to face the next steps of discovering new, grassroots solutions to the problem. 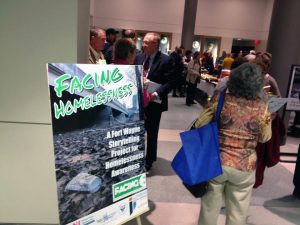 The first Facing Project was launched in Muncie, Indiana, in the winter of 2011-2012, under the title, Facing Poverty. TEAMWork for Quality Living, a nonprofit focused on empowering people in poverty toward self-sufficiency, featured the project as part of Muncie’s first annual Poverty Awareness Week in February 2012. Seventeen nonprofit organizations, businesses, Ball State University, the local newspaper, and a community foundation came on board to partner in the project.

Twenty-one stories were told and compiled into a book to share with the community at large. Twenty local actors from the Muncie Civic Theatre and Ball State University performed two nights of monologues to crowds made up of hundreds of community members. Through the stories shared and dialogues created, The Facing Project helped bring the face of poverty to the forefront, breakdown stereotypes, and open the door for those in poverty, and those who work with those in poverty to have their voices added to the conversation.

Since that time, The Facing Project piloted in five cities across the country:

The Faces Behind The Facing Project

The Facing Project was co-founded by J.R. Jamison and Kelsey Timmerman because they believe in the power of first-person stories to enact community change. As writers and active citizens, the two have witnessed this firsthand and are passionate about helping other communities tell their stories.

J.R. has spent the past decade promoting community engagement in higher education. His work has been adopted by more than 40 campuses and communities across the globe, and he has written and won over $4 million of grants to support communities in their efforts. His writings on community engagement have appeared in national journals and books, and he has been featured in The Huffington Post and on NPR.

Kelsey has spent the last decade helping people share their stories. He is the author of WHERE AM I WEARING? A Global Tour to the Countries, Factories, and People That Make Our Clothes (Wiley, 2008) and WHERE AM I EATING? An Adventure through the Global Food Economy (Wiley, 2013). His writing has appeared in publications such as the Christian Science Monitor, Condé Nast Portfolio, TIME magazine, and has aired on NPR. WEARING and EATING have been adopted as a common reader by over 70 high schools, colleges, and universities.

Both regularly speak at colleges, universities, high schools, and speaker series around the nation and the world.

J.R. and Kelsey can’t wait to help your community tell its story!